The AP100 is a high volume, ultra pure fog machine using liquid nitrogen and Deionized Water or WFI water to create about 15.5 cubic meters of fog per minute at a fog density of 1520 ml per minute for larger clean rooms, as well as stages and theaters. It is designed with a 316L stainless steel with an electro-polish finish. The AP100 can quickly produce large volumes of stage fog for theater and 3D theaters. The fog output would be used in large sterile rooms, large ISO suites and large semiconductor clean rooms during a 70 minute operating cycle. The AP100 Ultra Pure Fogger complies with USP 797 and ISO 14644-3, Annex B7 and Federal Standard 209E to visually describe airflow, patterns, direction, balance, dead zones and velocity for 3D airflow modeling  in large ISO suites, large sterile rooms and large clean rooms. No other ultra pure fogger is capable of this fog volume, which due to purity, can also be used for theatrical stage fog. No contamination is created and no clean up of any kind is required after visualizing the airflow. The fog evaporates back to the same air we breathe.

The AP100 Ultrapure Fogger supports clean room airflow visualization requirements, as well as stage fog, by quickly producing a high volume of fog with very high fog density to visualize airflow and provide stage fog. Traditional ultra pure foggers produce about 1.5 cubic meters per minute with a typical 250 ml per minute fog density. The AP100 produces 10 times more fog volume with 7 times more fog density and about 4 times more visual airflow distance. The high volume fog is ideal in large clean rooms, stages and theaters. The AP100 is a “Build to Order” product providing high volumes of visual airflow for larger ISO 1-9 suites, larger sterile rooms, larger clean rooms, theaters and stages. The AP100 uses liquid nitrogen and DI water or WFI water to quickly generate 15.5 cubic meters a minute of ultrapure fog to visualize large clean room areas. Ultrapure fog is breathable and evaporates back to the same air we breathe. Ultrapure Fog can also be safely used in 3D theaters, back projection and stages. The large volumes of ultrapure fog will travel for about 30-40 feet using 4 fog hose outputs. The fog evaporates back to the same air we breathe with no particles of any kind left behind. The AP100 can also be used as a safe stage fogger device. It is a far safer fog than using the traditional glycol fog, typically used in stage plays. No cleanup afterwards.

Smoke Studies and smoke tests use an LN2 ultrapure fogger to visualize airflow patterns and turbulence!

Fog Density is the controlling factor that enables a highly visual airflow for long distances. Fog density is a measure of how well you can track air movement; or how many fog vapor droplets are in a cubic centimeter of air. If you have a higher fog density, the airflow will be visible for longer distances, a requirement in larger clean rooms. At a nominal 2-3 microns in diameter and a fog density of 1520 ml per minute, the fog produced will visualize airflow for about 30-40 feet, one of the primary reasons of using the AP100 in large clean rooms. The AP100 uses 100 liters of liquid nitrogen and 14 liters of DI water or WFI water, and when power in turned on, a highly dense fog is produced, which floats into the airflow to visualize velocity, direction, turbulence, find dead airflow zones and balance airflow. 114000 ml of liquid is converted to fog at 2-3 micron vapor diameter, resulting in 1520 ml of fog density. This is 7 times more than traditional ultra pure fog generators and 3 times more then our AP35 ultrapure fogger. The AP100 produces more fog and is ideal for use in large clean rooms, large sterile rooms, large ISO suites and video stages.
AP100 ultra pure fogger – The AP100 is used in smoke studies of clean rooms, ISO suites and sterile rooms to provide visualization of airflow, flow patterns, dead spaces and turbulence, supporting USP 797 In-Situ Airflow Analysis, USP 800 Compound Pharmacy airflow requirements, ISO 14644-3 Annex B7 airflow guidelines and semiconductor clean room guidelines, Federal Standard 209E.

Ultrapure nitrogen foggers are used to provide high levels of fog in clean rooms, sterile rooms and ISO suites. It is also a very safe alternative for use as theatrical stage fog, replacing glycol foggers, which are not safe to breathe on stage. Liquid nitrogen is boiled to generate high levels of nitrogen molecules, which are mixed with de-ionized water or water for injection to produce an ultrapure fog at 15.5 cubic meters per minute for 90 minutes. More than 30 feet of visible airflow is provided, about 1162 cubic meters of ultra pure fog during a fog cycle. 100 liters of ln2 is filled into a dual wall LN2 Dewar and water is filled into a stainless steel, dual heating chamber. Water is brought to a high temperature and the liquid nitrogen boils at room temperature, allowing the vapor from both liquids to form a very visible, ultrapure, fog. The boiling process creates pure nitrogen molecules and water molecules, which combine to create a nominal 2-3 micron fog vapor droplet at a very high fog density. The high purity fog exits in the airflow with minimal disturbance of airflow. The AP100 provides the greatest visible air flow distance of 30-40 feet to visualize airflow turbulence and patterns. Video, 3D airflow modeling and stage fog is easily generated as the dense fog provides superb contrast between the fog and back ground. No contaminants are released into the airflow and the nitrogen/water fog evaporates back to the same elements we breathe. 16 Meg Ohm DI water is typically used, but WFI water can also be used, and in theatrical applications, tap water can be used. The AP100 provides increased visual distance of the moving airflow in large clean rooms. 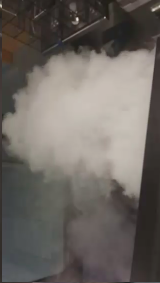